This post summarizes some issues I ran into while upgrading an EPiServer CMS 6 R1 website to CMS 6 R2.

Next I selected a site I had running on IIS that I wanted to upgrade:

Note: This post is actually based on the upgrade of another site, not Public Templates. :)

Could not find a matching <site> node

As soon as I clicked Run I was faced with an exception saying:
”System.ApplicationException: The web.config file for this site does not appear to match the EPiServer schema - could not find a matching <site> node”

This was caused by us having removed the XML namespace from the <episerver> element when using XML config transformations for configuration files.

So, we simply re-inserted the xmlns attribute:

After having re-added the XML namespace I got a bit further, but then I ran into the following exception saying “Error – Access to the path ‘[filepath]’ is denied.”

This was because of our TFS source control which causes all non-checked out files to be read-only (doh!). So, I simply checked out the entire project (which I should have done in the first place) and re-ran the update.

After having checked out the entire project, thus making all files writable, I ran into an exception saying “Error – Unrecognized configuration section system.web.extensions [web.config file path]”.

Looking at the exception details I saw that it had something to do with the Upgrade XForm Names script.

Honestly, I’m not sure what caused the script to fail, but since the <system.web.extensions> element contained nothing more than some JSON serialization settings, I decided to comment it out for the update:

The weird thing was, after the update failed the site was no longer visible in Deployment Center. I had to check the Show All Sites option to be able to retry the update.

After commenting out the <system.web.extensions> element I was able to complete the update. However, for some reason Deployment Center wouldn’t give me any reassuring confirmation, it simply showed a full progress bar and then – nothing more. :) 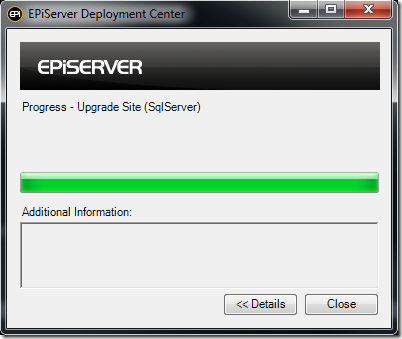 We didn’t use NuGet for this site (we haven’t gone over to using NuGet for EPiServer sites yet). Instead we keep a source-controlled “Libraries” folder where we store external assemblies and reference them from there (remember the bin folder should never be source-controlled). So, before re-compiling our site I copied the updated EPiServer CMS 6 R2 binaries from the bin folder to the site’s “Libraries” folder:

To ensure we’re referencing the correct EPiServer assembly versions (actually, whichever versions reside in our “Libraries” folder) we set the Specific Version property of the EPiServer references to False: 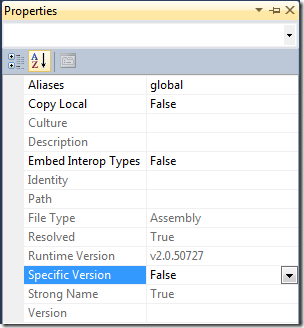 ‘InitializableModuleAttribute’ is not an attribute class

After having upgraded the site’s EPiServer binaries I tried re-compiling the project. However, it failed with an error saying “'EPiServer.Framework.InitializableModuleAttribute' is not an attribute class” (and the same for ModuleDependencyAttribute):

It seemed this was because the original .NET System.ComponentModel.Composition assembly was referenced, instead of the version being shipped with EPiServer. I simply copied the version located in the EPiServer Framework install folder:

After that everything compiled just fine!

Cast exceptions when the EPiServer site starts up

Although the site compiled I ran into the following exception when trying to browse to the site:
Unable to cast object of type 'EPiServer.Core.PageData' to type 'TemplateFoundation.PageTypes.RssPageBase'

Clearly this exception was related to EPiServer Template Foundation, further evident in the stack trace:

Actually, this led me to a bug in ETF which has now been fixed. :) If your site uses ETF I recommend updating to the latest version before performing the upgrade.

Next I noted that TinyMCE wouldn’t load properly in Firefox or Chrome (worked fine in IE, though). It was just as if the TinyMCE initialization script wasn’t executed:

I recognized the names from the two TinyMCE plugins in ETF that allow editors to include script and iframe tags in the editor. As it turns out, TinyMCE plugins require a script file named after the plugin. When such a file doesn’t exist, it seems the 404 breaks the TinyMCE initialization.

So, I added an empty file handler to ETF which can be used to avoid these 404:s without having to add script files to the EPiServer TinyMCE folder: 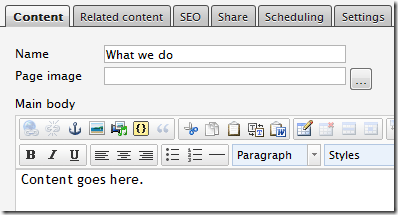