Built-in SMTP-server in the IIS returns 5.7.1 Unable to relay

Built-in SMTP-server in the IIS returns 5.7.1 Unable to relay

I did a small upgrade of a server that I’m in control of. Well it was actually a rather big upgrade, I added the SP2 of a Windows Server 2008 Web Server. Everything went perfectly, until we noticed that the SMTP-server had stopped working.

The only response was “SMTP server response: 550 5.7.1 Unable to relay” in the Eventlog. Strange I thought, since it worked perfectly a moment ago!

I started my quest for getting this to work again and found the very simple solution, but yet too close for me to see. The only thing I had to do was to allow the SMTP-server to relay messages from the local computer.

All this relates to the built-in SMTP-server for the IIS, to see how to configure the SMTP-server visit the IIS.NET site.

First step is to open the IIS manager, that you can find under “Control Panel / Administrative Tools”.

Once you have the manager in front of you, select the SMTP-server node. In our case named “[SMTP Virtual Server #1]”.

Right-click and select Properties and you will get the following window. 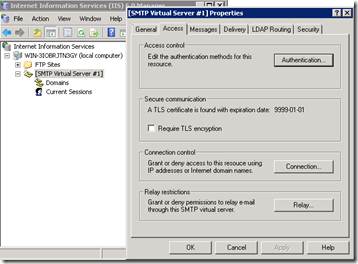 Under the headline “Relay restrictions” click on “Relay…”. In the window that pops-up fill out the parameters as shown. What you want to do is to allow the Local Computer (127.0.0.1) to be able to relay messages through this server. 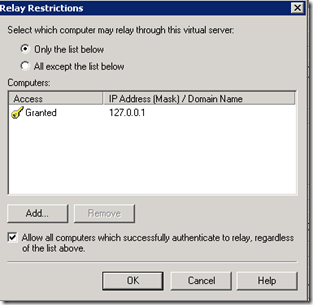 That’s it, now it should be nice and dandy and you are ready to start sending a lot of email messages again!