HTML5 and its impact on Flash and Silverlight

A lot of people are speculating how HTML5 will affect proprietary plugins such as Flash and Silverlight on the web. Here are my two cents on the subject. 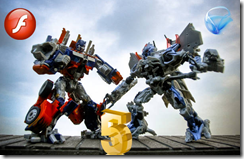 The HTML5 specification is under way (it has been since 2003) and many speculate – or claim to know everything - about its impact on the web experience as a whole, and different plugins such as Flash, Silverlight, and JavaFX.

Some argue that with support for HTML5 in the web browsers we’ll see less need for proprietary plugins, and of course many open source proponents hail this as the coming of the truly open standards web.

Now, I make no claim of knowing what the impacts will be, but I do (like most people in the industry) have an idea of what I think. And, for better or worse, I thought I’d share it.

The HTML5 specification (which is partially implemented in later versions of the dominant web browsers) offers things such as:

…and other features including drag and drop, offline web applications, and various tweaks driven by changing needs as the web evolves.

HTML5 to kill Flash and Silverlight

I will try to make this short: I do not believe HTML5 will kill Flash or Silverlight. However, because Flash is used so widely simply for embedding video, animations, and nearly-trivial user interactivity, I think Flash will be much more affected as HTML5 spreads.

Flash will be much more affected as HTML5 spreads

YouTube has started experimenting with HTML5, offering users the option to play videos using their browser’s support for the <video> element instead of Flash. Go ahead and try it - it’s really nice to be able to watch YouTube videos without the MacBook fan working at full capacity! Hint: Flash video makes the CPU work a lot.

Many sites are likely to follow as soon as Internet Explorer properly supports the standard - it’s still the number one choice among corporate users. However, it will likely not be released until sometime next summer.

Flash is also used heavily for animations. Some types of animations have already commonly been replaced using JavaScript libraries such as jQuery, but we’ll likely see even more animation scenarios moved from Flash implementations to native HTML5 going forward.

But not everything is video, audio and animations

HTML5 can do a lot more than what I’ve mentioned here, and it will affect what we use plugins for – but plugins will still survive, and for good reasons.

I think I can sum this up like this:

Flash will be affected by HTML5, but related development frameworks such as Adobe Flex will not disappear  – HTML5 does not provide the basis for true RIA (Rich Internet Applications) development.

Silverlight will likely not be affected to the same degree, mainly because it never was a wide-spread plugin for the applications now being made possible through HTML5. And in terms of RIA development, there really isn’t much point in comparing HTML5 to Silverlight.

Silverlight is becoming an integral part of RIA development and online applications such as non-compromising streaming video. But its main advantage is that it’s a well-strategized part of a well-encompassing framework covering everything from web applications to mobile phones and desktop applications. HTML5 just isn’t targeting the same requirements that Silverlight does.