Control which files are included when publishing an ASP.NET project

In this post we look at how to modify an ASP.NET project to include additional files not included in the project, and also how to exclude specific folders, when the project is published or deployed.

In a default ASP.NET project configuration, all files (except code-behind files) included in a project are copied to the target location when publishing a project or creating a deployment package.

However, quite often we need to customize this behavior to suit our specific projects, especially when setting up automated builds - for example for continuous integration or for when we do a manual publish from within Visual Studio.

This post goes through some project modifications to include additional files, and also to exclude specific folders, when a website is published or when a deployment package is created.

Copy additional files not included in the project

Common examples are JavaScript and CSS files that are compressed/minified as part of the build process. We never include minified files in the project as they should be updated on every build, and we don’t want to include them in source control. However, we still want these non-project files to be copied as part of a publish or deploy action.

Including additional files in publish and deploy scenarios

To include additional files not included in the project we’ll add some XML declarations to the .csproj project file. To edit it in Visual Studio we first right-click the project node in Solution Explorer and select Unload Project:

Next, we locate the line that says:

To copy additional files when our project is published (or deployed through an automated build) we define an additional MSBuild target called CustomCollectFiles beneath the <Import> element above. This target extends the CopyAllFilesToSingleFolderForPackageDependsOn target (phew!) which controls which files are copied in a publish or deploy scenario.

Next we specify which files should be included in this new CustomCollectFiles target by adding additional XML declarations beneath the <PropertyGroup> element we added. The following example copies all minified JavaScript and CSS files when the project is published or deployed:

Note that for each group of files we first declare an element with a name for the group, such as <CompressedScripts>. This is now a variable that we can use for the <FilesForPackagingFromProject> element, above seen as %(CompressedScripts.Identity).

When we’re done modifying our project file we right-click the project node in Solution Explorer and click Reload Project.

Now, if we choose to Publish the project… 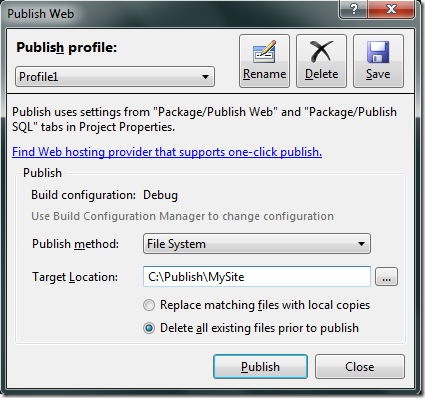 We often add multiple resource folders to our projects, and by convention we name them inside brackets:

Although required for development, we don’t want these folders to be included when the website is published. So, we edit our project file like we did for file inclusion earlier, but instead we add one or more <ExcludeFromPackageFolders> elements inside an <ItemGroup> element.

The following ensures the three resource folders above are excluded from publish and deployment package scenarios:

Now, even though multiple folders are included in our project… 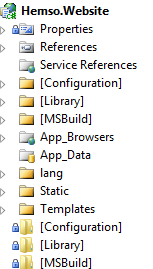 Note: a side-effect of excluding folders this way is that the folder names will be displayed twice in Solution Explorer, I haven’t figured out if there’s a way around this.